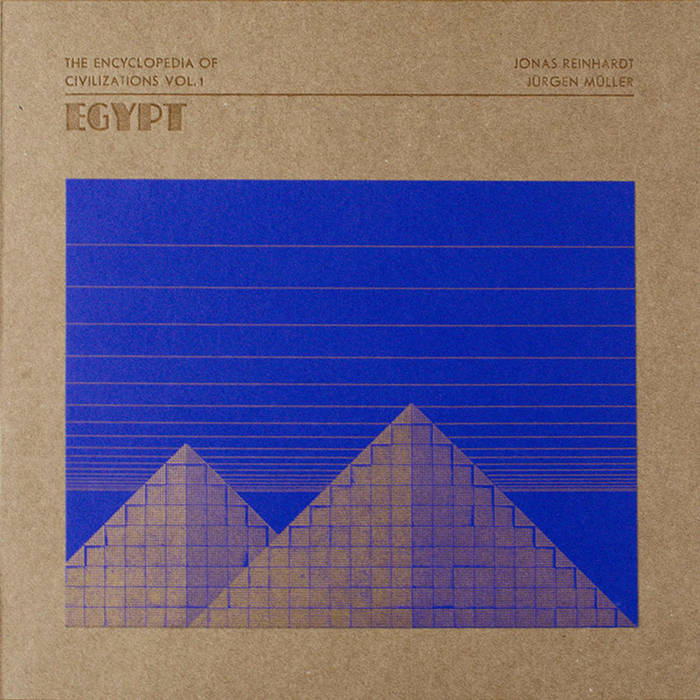 Dumb mmmn i can't explain why I'm drawn to this, but I like the sights and soumds provided here. excellent music for painting

The LP is the first volume on "The Encyclopedia of Civilizations", a collection of split LP's just started at Abstrakce where selected artists offer their own insight into fascinating ancient cultures. In this volume music is inspired by ancient Egypt and comes with a 10-page booklet with images and texts explaining historic facts. The texts written by Juan Ruiz -an Spanish archeologist and researcher- in a half scientific/half poetic way rounds the music and transports you to the Ancient Egypt to get the whole listening experience. The careful design of the edition also helps: Egyptian colors (sand, electric blue, gold) and a sleeve printed in the old way, letterpressed with metal movable type as Gutemberg used to do it.

Jürgen Müller is the pseudonym previously used by Norm Chambers (aka Panabrite) for the album "Science of the sea", presented as an archival find by Digitalis Recordings in 2011. The album was supposed to be a reissue of early 80's songs recorded by a a self-taught composer who was studying oceanic science and playing some music on his houseboat, dreaming to sell the compositions to film and TV companies. Now Jürgen comes back and this time there's no romantic misterious story to tell, just some astonishing modular ambient songs influenced by library music, kosmische, minimalism or new age. Songs that refer to artists such as Mort Garson or contemporaries as M. Geddes Gengras or Jonathan Fitoussi.

Jonas Reinhardt is a Brooklyn based musician with releases in labels such as Not Not Fun, Kranky, The great pop supplement, Further or VCO records. His side is also influenced by kosmische but in a different code, more trippy and psychedelic. Deeper and darker atmospheres that remind to musicians such as Klaus Schulze, Steve Hauschildt or synthetist Steve Moore. Songs full of synth arpeggios and reverbered sound waves that create Egyptian dream visions.

www.discogs.com/sell/item/467867546
Record stores, distros get in touch for wholesale prices.

Bandcamp Daily  your guide to the world of Bandcamp